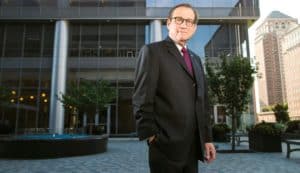 Nearly two weeks before protests erupted in Ferguson after a grand jury’s decision not to indict the officer who killed Michael Brown, Michael Neidorff was appointed chairman of the National Urban League, a historic civil rights organization.

The appointment would prove to be pivotal for future investments in Ferguson.

Brown’s death sparked a national discussion about police brutality and systemic racism. Ferguson, a suburban community just north of the city of St. Louis, became a symbol of a modern day civil rights movement that called on Americans to recognize that “Black Lives Matter.”

Neidorff, who proved to be a difference maker in Ferguson, has been selected as the 2017 Citizen of the Year. The honor is sponsored by the Post-Dispatch and selected by a committee of past winners.

As unrest from the protests led to violence and the destruction of property, including small businesses that later considered closing for good, Neidorff, the CEO of Centene, feared for the community’s long-term viability. He worried the event would mark the “death knell” for Ferguson.

“I learned that what happened in Ferguson could happen in 150 communities in this country,” Neidorff told the Post-Dispatch.

“I mean the circumstances are right for the kinds of things that took place there to happen elsewhere; we’ve seen it in Baltimore and elsewhere. I sat back and I said, ‘OK, if St. Louis is going to come out of this well and stronger, we have to show the country what the solution is to these kinds of issues.’”

It was then that Neidorff decided it was up to his Fortune 500 company to invest in Ferguson, to create opportunity and jobs at a time when many were thinking about anything but.

At the helm of one of the nation’s largest companies, Neidorff committed to building a $25 million state-of-the-art office with a preschool for the employees’ children. The center opened in 2016 and now employs more than 200 individuals from the area.

“Oh, it’s outstanding,” Neidorff said of the Ferguson call center. “It’s one of the best we have: low turnover, great productivity.” Read more…